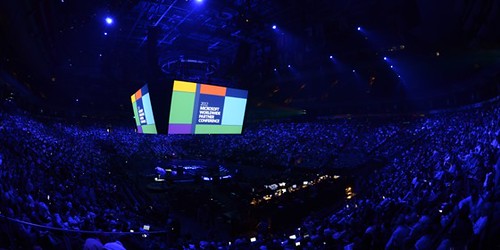 While attending the Microsoft Worldwide Partner Conference (WPC), I fully expected to hear about the wonders of the Microsoft Cloud and how everyone but the organizations on my client list has already migrated to Office365. I wasn’t disappointed, as I did hear that message, loud and clear. While that topic of discussion wasn’t out of the ordinary, I found it strange that other subjects were not addressed. This was my fifth WPC event, and the previous events were distinctly marked by highly motivated people pitching me the next greatest desktop operating system, the next great server release, and how my databases will be so much better with this latest edition.

While the presenters made passing references to how great Windows 8 was as a desktop, laptop, tablet, and mobile phone platform, those references were so nonchalant and absolute it truly seemed as though it was the only operating system available.  Gone were the barbs targeting Apple OS, and I only noticed a slight mention of Google Chrome on occasion.  Is it possible that Microsoft has actually turned a corner in product focus, OR are they truly focusing on mobile and cloud so therefore everything can’t be on the main stage?

In the Wednesday keynote, the speaker revealed that the Windows Operating System Development Team was pivoting from a multi-year version release cycle to making regular updates with new features.  For example, the Windows 8.1 release focused on improving the core elements of the mouse and keyboard user experience.  Subsequent incremental releases won’t merely be patch fixes, but will also provide substantial improvements. This agile model of development and product release will allow more capabilities to be delivered to consumers at a faster pace.

The prevalent use of Microsoft Office is obviously so ubiquitous that it needs little mention.  Word and PowerPoint received zero press.  Excel was highly lauded, but only in respect to the new Power BI tools available from Office365 and the Power Q&A tools available from Microsoft Azure.  There were ZERO breakout sessions on new Office enhancements.   The sexy elements of Microsoft Office were most undoubtedly Yammer and OneDrive for Business.  Yammer looks, acts, and feels like Facebook for the enterprise (although I was told not to call it that because there’s no check-in feature like in Facebook).   However, Yammer is an exceptional part of the Office product suite for providing internal collaboration through posts, groups, and chats.  Of course, you can still invite external people to participate (which sort of nullifies the internal portion) and you can also send private messages (which sort of nullifies the public-by-default approach).   I asked the Yammer rep about how to distinguish SharePoint MySites and Yammer, and he provided a great response.  He indicated that all SharePoint posts are private by default, and people have to be invited to see them.  In contrast, all Yammer content is public by default, and users must restrict group access to keep them private.

I fully expected the SharePoint enterprise search to be integrated with Yammer to return documents, emails, and chat content relevant to my search.   However, that’s not the case; at least not just yet.   Right now, Yammer only returns content within the product.  By the way, Yammer is offered as a SaaS only with Office365, and there’s no option for on-premise installations.   Further investigation revealed Yammer content will be included in the Office Graph data layer in the coming months.  Once there, it’s subject to discovery and presentation by Delve.   If Cortana is really watching out for me, maybe she’ll let me know if someone is volunteering me for work during Yammer sessions and block my calendar accordingly.

The core data center product of Microsoft is and always will be the Windows server line.  However, there was very little fanfare about Server 2012 R2 and all the wonderful things it will provide for you.   What was evident is that every single solution required Windows Server 2012 R2 AND System Center for delivery and management.  I wouldn’t exactly call it deviant laughter, but there was an obvious buzz of excitement about the loss of support for Windows Server 2003.  As if to pile on, many Microsoft Representatives made it very clear that it’s not only Server 2003 we should be addressing, but it’s also SQL Server 2005 and Exchange 2003.  As if for emphasis, the presenters at the server migration session wanted everyone to know that you can’t just migrate roles such as Active Directory from 2003 straight to 2012.   You must first insert a Windows Server 2008 R2 as a swing server to take the proper migration path to 2012 R2.  It’s definitely a reminder that procrastinating on server upgrades really doesn’t save time.   Regardless, the general consensus is that the integration partner community has years of work ahead of us upgrading people from platforms that have lapsed in support.